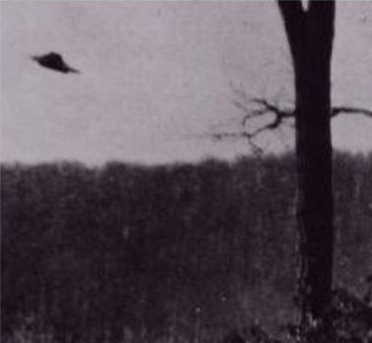 Twas the week before Christmas in 1966, when twenty-three-year old Vincent and two pals decided to do a little winter fishing. The winter weather was rather temperate for December so they decided to do their fishing at a spot along the Hudson River, about 40 miles north of New York City.

To the east of them, on the shore of the Hudson, was the Indian Point Nuclear Power Station. On the western shore of Hudson was Harriman State Park.

The three young men were involved with the art of their fishing when suddenly something strange was spotted in the sky over or near Lake Tiorati deep in the Harriman forests.

Vincent tells us, “Suddenly a rare object of bronze color appeared, making no noise and its size was approximately 6 meters” (diameter).

Twenty-three-year old Vincent snapped four photos. Later the US Air Force – Project Blue Book representatives later did a scant investigation and quickly labeled the sighting photos a hoax. Later the National Investigations Committee on Aerial Phenomena (NICAP) studied the photos and interviewed the three men who witnessed the UFO event. NICAP investigators found no evidence of any hoax. This photo is in the archives of the Best Photos of UFOs website. (NICAP case 661218)

Lastly, it should be noted that the Indian Point Nuclear Power facility is just a mere three miles to the east of Lake Tiorati. The nuclear facility was ground zero for many high visibility Triangle and Chevron UFO sightings in the 1970s and 1980s. 6 December 2014: at about 6 p.m. a motorist in Patterson, NY was driving down state route 311 when he witnessed three bright lights in a triangle shape that were clearly hovering above the tree tops. As he continued to drive he lost sight of the lights.

8 December 2014: at about 7:30 a.m. a motorist driving north on the Taconic Parkway saw a circular object in the sky moving very slowly that blocked out the morning sun light.

12 December 2014: at about 9:10 a.m. a New York City resident was woken from a nap by a loud roaring sound. He looked outside and witnessed a rectangle object in the sky. It was traveling very fast.

13 December 2014: at about 9 p.m. a resident of Pawling, NY had just stepped outside from dinner with guests. Sudden he saw two round bright red lights erratically pulsating off in the northwest sky.

17 December 2014: at about 11 p.m. a motorist in Sherburne, NY was driving south on state route 12 with his wife when they both saw a very bright, vivid blue light making fast erratic movements then it shot across the sky very fast in front of them then upward in a ten o’clock direction, then disappeared.

The Peace of Contentment
#takeatour Year in Review
To Top